Do you want to read the blog? Just click on the headline and you will get the complete article.

We are happy to inform you about future blogs and videos. Send us an email and we shall keep you updated.

..... and why investing in mining companies continues to be a potentially very rewarding proposition.

Dr. Frank Bierlein is Chairman of the Advisory Board, ME Fonds – PERGAMON.

Our prehistoric ancestors were highly successful hunters and gatherers who, for the most part, took advantage of what their surroundings had to offer them in terms of delightfully tasting things that either hung from trees or bounced across lush grass-covered plains. That is, until one of the most fundamental quantum leaps in the evolution of our entire species – besides the taming of fire, of course – occurred when our cave-dwelling antecedents discovered the value of mineral resources. Not only were these new-found riches of tremendous use for the purpose of manufacturing high(er)-quality hunting tools, utensils and goods that could be traded, these ‘ores’ also contributed to an enormous, irreversible increase in both quality and life expectancy of Homo Sapiens. And so it came to pass that our wired, globally connected, mobile and ever-growing society has become entirely dependent on the exploitation of mineral resources at a global scale.

The first mineral deposits were limited to surface accumulations of malleable metals such as silver, gold, copper and iron. Due to the rapidly increasing demand and an unrelentingly growing – and ever-more connected – society, however, these ‘placer’ occurrences were very quickly replaced by hard-rock operations that targeted a mounting list of elements. Small dug-outs and adits became more commonplace and these developed, over time and thanks to human ingenuity, into the vast mechanized open-cut mines and extensive underground operations of today.

The famous saying that “If it can’t be grown, it has to be mined” has never rung more true. Mineral resources and their multitude of end products represent fundamental building stones of our daily lives. We can find them in our food (and I am not referring to toxic contaminants here), we are surrounded by them in our homes, in our cars and on the roads we travel, we use them in our daily work and for our leisure activities, when we go shopping, cook and enjoy our meals (irrespective of whether it happens to be a Happy Meal or a five-star gourmet experience), they protect us from sun burn and rain, they enable us to travel from Heathrow to Las Palmas in less than five hours while staying in contact with our loved ones throughout and without fear that the battery in our laptop will run down, they are irreplaceable in the construction and operation of solar panels and wind turbines, and they ensure that we can enjoy and maintain our accustomed life style into old age. You get my drift. But did you know that a single smart phone contains over 60 different metals (http://www.techradar.com/news/phone-and-communications/mobile-phones/our-smartphone-addiction-is-costing-the-earth-1299378)? Many of these are as yet irreplaceable (i.e. they cannot be substituted by any other material), every single one of these metals is well-travelled and has been extracted from a mine somewhere in China, Peru, Australia or South Africa. Germany alone processed some 42.6 million tons of iron ore in 2013 – a considerable amount, but one that pales in comparison to China’s consumption of 779 million tons in the same period (http://www.ironorefacts.com/the-facts/iron-ore-global-markets/). The demand of even some of the more ‘obscure’ metals such as niobium and cobalt is in the 100,000s of tons annually (http://web.mit.edu/12.000/www/m2016/finalwebsite/problems/ raremetals.html), and rising.

Once ‘consumed’, all of these mineral resources have to be replaced – unless we make a conscious decision to revert back to the simple life style our cave-dwelling ancestors enjoyed.  Indeed, several of the most important commodities such as copper are currently being consumed at a faster rate than the rate with which new, economically exploitable deposits are being discovered and developed. Recycling of, for example, lead and some other metals can be cost-efficient and is being done increasingly to conserve primary resources. But this approach simply cannot make up for the widening supply shortfall in the face of our insatiable demand for metals, industry minerals and construction materials. Especially when considering the enormity of a relentlessly growing demand for mineral resources in most of the developing nations. In India, an estimated 314 million people will own a mobile phone by the end of 2017. This figure compares with ‘just’ 159 million mobile owners in 2014 (Mobile Association of India Report). Apple Inc. sold 96.2 million iPhones, iPads and computers in the first quarter of 2016 (http://images.apple.com/pr/pdf/q1fy16datasum.pdf) – every single one of these gadgets is packed with rare earth elements, precious metals, and other metalliferous commodities such as aluminum, copper, lithium and nickel.

The above explanations offer just some reasons why our society simply cannot cease to dig up big holes in the ground any time soon for the purpose of extracting mineral resources. This is of course not to say that companies should be allowed to operate mines card blanche-style and at the expense of environmental, social or cultural considerations. However – and provided relevant rules and regulations are adhered to at all times – the necessity to extract mineral resources by means of open-pit and underground mining will remain an irrefutable, yet simple fact of life for decades to come.

It is quite conceivable that the exploitation of mineral-rich asteroids might will become reality at some point in the future. Doing so will shift the dusty business of digging up dirt entirely out of our sights and minds, and without causing any further potential damage to the Earth’s fragile eco-systems. To be sure, this idea is gaining increasing support – for example, Luxemburg has recently invested a whopping 25 million Euros in an American extra-terrestrial mining company that is proposing to (eventually) explore and extract mineral resources from near-Earth asteroids (http://www.mining.com/luxembourg-shoots-for-the-stars-invests-28-million-in-planetary-resources/). In 2015, President Obama signed into law a bill that allows US citizens to undertake exploration in space and acquire mining licenses on heavenly bodies for the purpose of extracting mineral resources (http://www.planetaryresources.com/2015/11/president-obama-signs-bill-recognizing-asteroid-resource-property-rights-into-law/). As promising as these developments sound, it is probably safe to assume that it will take a few more years yet before Bruce Willis and his driller mates can fire up the first rig on 99942 Apophis, Ceres or 1950 DA (the latter should perhaps be made a priority target as it is on a possible collision course with Earth in 2880; http://neo.jpl.nasa.gov/1950da/). The answer to the question of how these mineral resources will actually be transported back to Earth (in concentrated form?) is as yet written in the stars (pun intended).

And yet, in spite of the omnipresence in, and acute importance of mineral resources to our lives, is quite astounding how small a percentage of our society is willing to give serious consideration to the critical, and ongoing requirement of big holes in the ground. This disconnect is particularly common in countries where traditional large-scale mining has become a thing of the distant past and abandoned mines (rehabilitated or not) are viewed as mere eye-sores and reminders of a dirtier, bygone period.

And perhaps it is for this very reason that the minerals resources sector suffers from a ‘Cinderella-like’ image problem as far as investment and capital growth opportunities go. Nevertheless, well-managed mining and exploration companies with a clear vision and/or a successful track record can be exceptionally profitable for the sophisticated investor. Moreover, top-tier mining companies such as BHP Billiton, Newmont Mining and Anglo-American (to name a few) have been paying respectable dividends even in times of economic difficulty. Especially when considering the ongoing volatility that has been gripping the global financial markets, as well as the toxic combination of quantitative easing and historically low interest rates, mining stocks – and in particular those in the precious metal sector – represent a ‘solid’ alternative.

Dr. Frank Bierlein is Chairman of the Advisory Board, ME Fonds – PERGAMON. 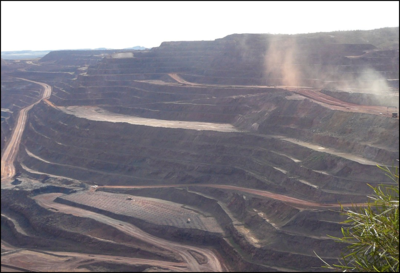 BHP Billiton’s Mt Whaleback Mine in the Pilbara region of Western Australia (photo by F. Bierlein)